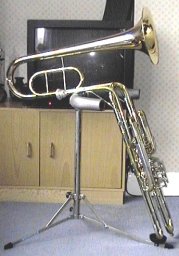 He played the Solo Ophicleide part in Berlioz' "Damnation of Faust" for English National Opera, and gave several performances of Peter Sculthorpe's "From Ubirr", playing solo didgeridoo (with the English String Quartet).

Commercial experience includes many jingles, film and T.V. soundtracks on several instruments including Ophicléïde, Cimbasso, Sousaphone and Bass Saxophone in addition to the Tuba.

John also has an educational group called "Sousafun", (consisting of a Sousaphone and a Clarinet) which tours schools giving primary school children an introduction to the science of music, together with some musical magic and also performing on instruments made from vegetables!