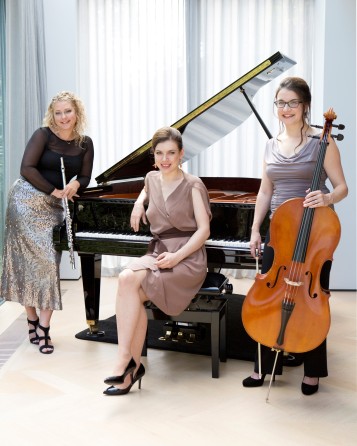 The London-based Marsyas Trio, formed in 2009 by graduates of the Royal Academy of Music, is dedicated to music for flute, cello & piano from the Classical era onwards. Aiming to inspire a generation of new works for this genre, they are uncovering lesser-known repertoire and are proactive in commissioning new music.

The Marsyas Trio’s recent performances include a North American tour (New York, Boston and Toronto), the St David’s Cathedral Festival in Wales, Cambridge Festival of Ideas and St John’s Smith Square in London. The trio has performed live on BBC Radio 3’s In Tune, Classic FM Bulgaria, and Bulgarian National Television. Their concert in Switzerland at the Société de Musique Contemporaine Lausanne, was broadcast on the Swiss Radio station RTS Espace 2. The trio’s CD, A Triple Portrait (Meridian Records 2015) received airtime on European radio and reviews internationally, including Cambridge Music Journal Tempo, The Strad, and Australia’s Limelight magazine. Other concerts highlights include tours in Europe and China, in the West Country for Concerts in the West, numerous UK festivals, including the Vale of Glamorgan and Three Choirs Festivals, as well as Spitalfields Music in the City, St John’s Smith Square and the Holywell Music Room (Oxford Chamber Music Society). The trio has performed in rural Wales as part of the Arts Council of Wales’ Night Out scheme, which aims to bring top level chamber music to regional audiences.

The Marsyas Trio’s latest CD, In the Theatre of Air (NMC Recordings 2018), debuted at No. 7 on the classical charts. The disc was reviewed in Gramophone, BBC Music Magazine (4-stars), Tempo, and featured in the Sunday Times’ The Week’s Essential New Releases, with broadcasts including BBC Radio 3 and RTÉ Lyric FM. The ensemble has worked with many of Britain’s leading composers, both established and emerging, including Michael Finnissy, Judith Weir, Elena Firsova and Laura Bowler. The Marsyas Trio has received generous and repeated support from the RVW Trust, PRS Foundation, Hinrichsen Foundation, Ambache Charitable Trust, Fidelio Charitable Trust, Britten-Pears Foundation and Arts Council England. In 2019 they were awarded a touring grant from HMUK’s Do IT Differently Fund.

The ensemble takes its name from Greek mythology – inspired by the bold, spirited passion of Marsyas, the celebrated pipe-playing satyr who dared challenge Apollo in a musical contest.

“It is Baudelaire rather than Mandelstam whom Firsova evokes with her most direct tribute to the admirable Marsyas Trio, A Triple Portrait ...At a time when modernism is slowly fading away…Firsova’s music makes a plausible case for such deeper, darker echoes.” Full Article Page 1   Page 2
Arnold Whittall, Tempo Cambridge University Press journal, Jan 2016

“This is an exciting new release with impressive works that are full of expression, emotion, passion, poetry and not a little virtuosity…fine work that receives a first class performance from this ensemble.” Full Article

“The Marsyas Trio and their guests…give superb performances of often difficult music. A highly recommended disc for anyone interested in a distinctive voice in contemporary music.” Full Article
Robert Hugill, Planet Hugill, Nov 2015

“Performances and recording are excellent throughout. Despite the unusual combination of instruments, the players work closely together and always produce a unified tone…This disc provides an excellent introduction to the music of Elena Firsova.” Full Article
Gavin Dixon, Music Fanfare, issue 39:1 (Sept/Oct 2015)